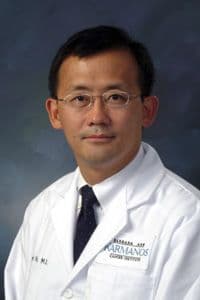 Dr. George Yoo is a head and neck surgical oncologist and a Professor in the departments of Otolaryngology-Head and Neck Surgery at Wayne State University (WSU) and the Karmanos Cancer Center (KCC).  Dr. Yoo is an expert in the surgical management of head and neck (mouth and throat) cancers along with melanoma, thyroid, parotid and sinus tumors.  Dr. Yoo has been selected as "The Best Doctors in America", "HOUR Detroit Magazine", "Top Doctors", and "Who's Who in America".

At KCC, Dr. Yoo is the Chief Medical Officer and Director of Clinical Affairs.  He serves as the Chair of the Surgery Committee in the Southwest Oncology Group (SWOG).

Dr. Yoo completed his residency in Otolaryngology-Head and Neck Surgery at Johns Hopkins Hospital (JHH) in 1995 and then completed a fellowship at JHH in 1996.  He is a diplomat of the American Board of Otolaryngology-Head and Neck Surgery.  Dr. Yoo's current research interests include gene therapy and surgical adjuvant therapy for head and neck cancer.  He has published over 70 articles and 6 chapters on head and neck cancer.